All About Cheese: This One’s Feta! 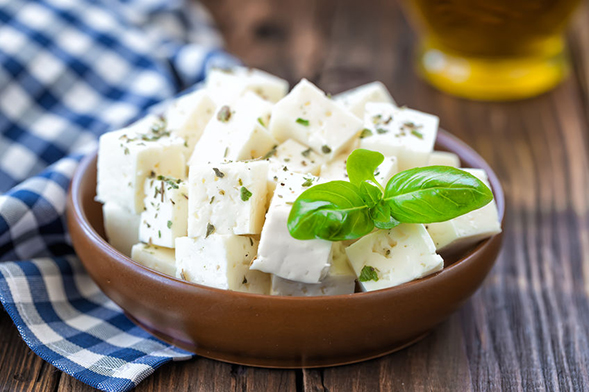 See what I did there?! Feta Cheese is undoubtedly one of the most famous of the Greek cheeses. In fact, Feta comprises 70% of Greek cheese consumption. The cheese is protected by the European Union legislation and only those cheeses manufactured in Macedonia, Thrace, Thessaly, Central Mainland Greece, the Peloponnese, Lesvos, and Island of Kefalonia can be called feta. Similar cheeses produced elsewhere in the eastern Mediterranean, around the Black Sea, and outside the European Union, are often called white cheese.

In 2013, an agreement was reached between the European Union and Canada in which feta made in Canada would be called ‘Feta style cheese’ but would not depict anything evoking Greece on the label. Canadian companies using the “feta” name before October 2013 can continue to do so.

Why is it So Delicious?

A soft brined, white cheese with either no holes or small holes, Feta has a compact touch, few cuts, and no skin covering it. It’s usually formed into large blocks, which are then submerged in brine, helping to preserve the salty, tangy flavour that ranges from mild to sharp. Feta cheese is traditionally categorized into firm and soft varieties where the firm variety is tangier and considered higher in quality. The soft variety is almost soft enough to be spreadable, mostly used in pies and sold at a cheaper price.

High-quality feta should have a creamy texture when sampled, with aromas of ewe’s milk, butter, and yogourt. On the tongue, it’s tangy, slightly salty, and mildly sour, with a spicy finish reminiscent of pepper and ginger, as well as a hint of sweetness.

Vince’s Market has its own variety of Vince’s Own Feta and it’s delicious!

Just in case you’re not really up on your Feta Facts, we’ve got you covered!

What can you do with Feta that might not be on your radar?

We’d love to hear from you! Do you love Feta, or have a fantastic recipe to share?? Leave us a comment here or head on over and join in the conversation on Facebook (please ‘Like’ the page if you’re so inclined) and Twitter. If you haven’t already signed up to receive our weekly newsletter which includes our blog, the weekly product feature, the weekly Coterie savings, and our recipe of the week delivered right to your inbox, you’ll find the signup by clicking here.