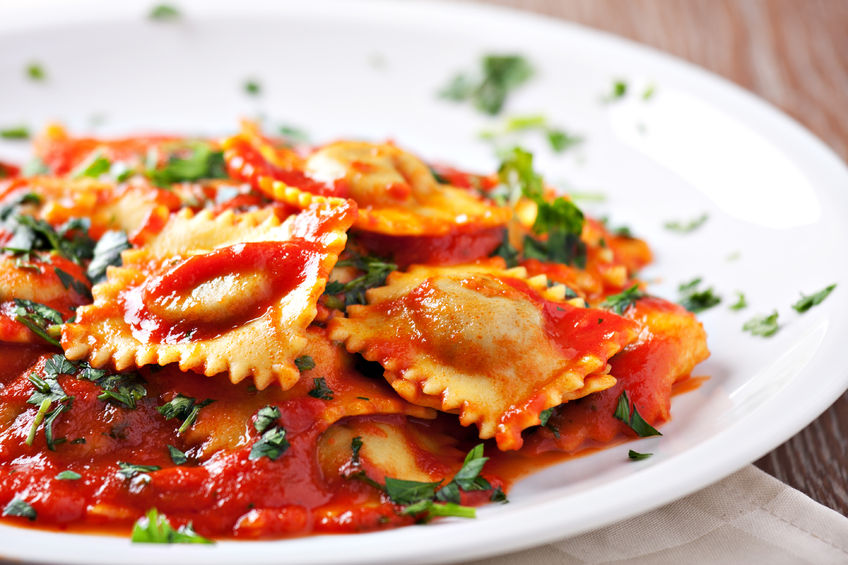 March 20th is National Ravioli Day and with the current health pandemic blanketing the planet, it’s nice to have something else to celebrate. And why not the delicious pasta pockets of meat, cheese, and vegetables?

A Brief History of Ravioli

The word ravioli is from an old Italian word riavvolgere, which means to wrap. The origin of this famous Italian staple food dates to the 14th century. The recipe for traditional Italian ravioli mainly features mixed green herbs, fresh cheese, and beaten eggs all simmered in a broth. Classic Italian ravioli is square-shaped pasta where each side is about 4 cm. In ancient Italy, these tiny dumplings were served every Friday and during the solemn religious observance of Lent.

Traditionally, ravioli are made at home. The filling varies according to the area where they are prepared. For example, in Rome and Latium, the filling is made with ricotta cheese, spinach, nutmeg and black pepper. While in Sardinia, ravioli are filled with ricotta and grated lemon rind.

Canned ravioli was pioneered by the Italian Army in the First World War. These were popularized by Heinz and Buitoni in the UK and Europe, and Chef Boyardee in the United States. Canned ravioli may be filled with beef, processed cheese, chicken, or Italian sausage and served in a tomato, tomato-meat, or tomato-cheese sauce. Toasted ravioli (ravioli that have been breaded and deep fried) is a popular appetizer and snack food.

Many cuisines across the world have their own version of ravioli:

The Facts of Ravioli

We’d love to hear from you! What do you love about Ravioli? Do you have a recipe you love? Leave us a comment here or head over and join in the conversation on Facebook (don’t forget to give us a “like”) and Twitter.

If you haven’t already signed up to receive our weekly newsletter which includes our blog, the weekly product feature, the weekly Coterie savings, and our recipe of the week delivered right to your inbox, you’ll find the signup by clicking here.