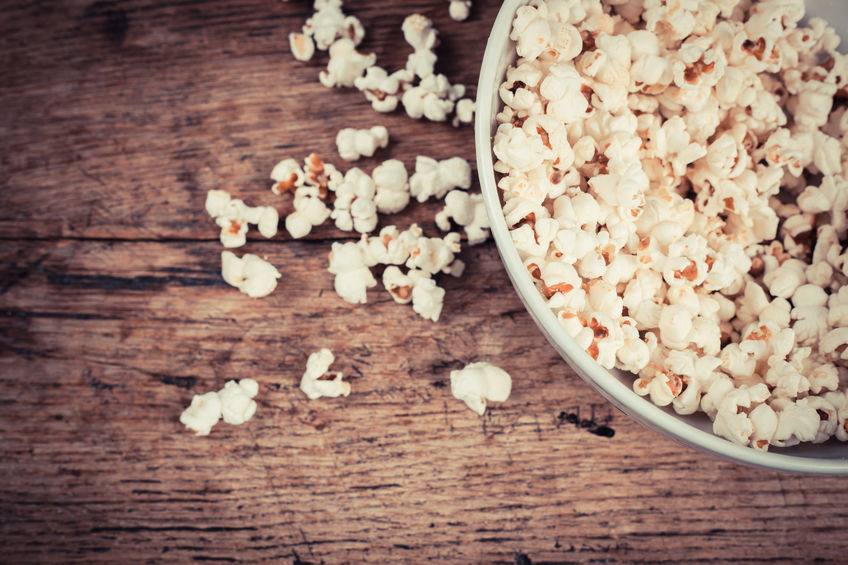 Let’s take a moment to talk about popcorn. Did you know that not all corn is popcorn? There are 4 major types of corn, only one of which makes popcorn.

Dent corn, also called field corn, is the most widely grown corn in the U.S and Canada. Used primarily as livestock feed, it’s also used in some food products. It gets its name from the mixture of hard and soft starches that become indented once the corn is dried.

Flint corn, also known as Indian corn, is similar to dent corn. With a hard outer shell, it’s distinguished by a wide range of colors. It is grown mostly in Central and South America and is primarily used as decoration in North America around harvest time.

Popcorn is a type of flint corn but has its own size, shape, starch level and moisture content. With a hard exterior shell and a soft starchy center, it explodes when heated as the natural moisture inside the kernel turns to steam and builds up enough pressure. Other types of dried corn may burst open slightly when heated, but not like popcorn, which is unique in its taste and “popability” (popcorn lingo that refers to the percentage of kernels that pop)

Sweet corn, or ‘corn on the cob,’ is almost all soft starch and will never pop. It contains more sugar than other types of corn. Unlike other corns that are picked when the kernels are dry and mature, sweet corn is picked and eaten while the ears are in the immature milk stage and the kernels are tender.

Exploding onto the World Stage

Discovered in the Americas thousands of years ago, popcorn has captivated people for centuries with its mythical, magical charm.

Popcorn is a healthy whole-grain, naturally low in fat and calories, gluten-free, and non-GMO, which makes it a great fit for today’s health conscious consumer. It’s easy to understand why popcorn has remained so popular over time.

The history of popcorn is deep throughout the Americas, where corn is a staple food, but the oldest popcorn known to date was found in New Mexico. In 1948, Herbert Dick and Earle Smith discovered small heads of corn and individually popped kernels deep in a dry cave known as the “Bat Cave.” The kernels have since been carbon-dated to be approximately 5,600 years old!

Decorated funeral urns in Mexico from 300 A.D. depict a maize god with popped kernels adorning his headdress. Evidence of popcorn throughout Central and South America, particularly Peru, Guatemala, and Mexico, is rampant. Aztec Indians used popcorn not only for eating but also for decorating clothing and other ceremonial embellishments.

Indigenous populations throughout North America also have a rich history documenting the consumption of popcorn. In addition to the kernels found in New Mexico, a kernel approximately 1,000 years old was found in Utah in a cave that was thought to be inhabited by Pueblo Indians. French explorers that came to the new world found popcorn being made by the Iroquois in the Great Lakes region as well.

As colonists began moving to North America, they adopted the popular Native American food. Not only was popcorn eaten as a snack, but it was also reported to have been eaten with milk and sugar like a breakfast cereal. Popcorn was also cooked by colonists with a small amount of molasses, creating a snack similar to today’s kettle corn.

Here are some interesting facts you may not know:

Vince’s Market has its own line of popcorn that we pop in store! With flavours like Movie Style, Caramel, White Cheddar, Dill Pickle plus a few more, there’s something for everyone!

If you haven’t already signed up to receive our weekly newsletter which includes our blog, the weekly product feature, the weekly Coterie savings, and our recipe of the week delivered right to your inbox, you’ll find the signup by clicking here.